Noleen Kutash could see the ocean.

The native South African had a marvelous view from her home perched on a cliff in Palos Verdes. But one morning in 2000, after deciding with her ex-husband to sell the house, she realized a drastic change was needed.

“I went to sleep thinking, ‘Where am I going?’ I woke up thinking Italy,” Kutash said in a charming accent. “I needed another view, and why not olives?”

She found an international school for her then 11-year-old daughter, Kyleen, and the duo were off to Florence where Kutash spent her time studying the Renaissance while making fig jam, harvesting olives and writing letters to friends.

The trip would be a catalyst for the travels to come. In a year’s time, she would be back in America – eventually winding up in Newport Beach – as one of the most prolific importers of South African furniture, décor and art in the nation.

“My first experience in retail was during America’s worst moment,” Kutash recalled.

She had returned from Italy and was living at a friend’s house in Palos Verdes. Another friend, who had been importing furniture from Indonesia, asked her to go to South Africa to find picture frames, candles and a few items of furniture.

Kutash – born in the wine region of Paarl, South Africa – went and bought 1,000 pounds of merchandise. She returned to the U.S. on Sept. 1. Ten days later, terrorists attacked the World Trade Center and her freight was delayed by three weeks.

“America was in mourning,” she said. “People were not in the mood to shop.”

Though her start was rough, business gradually grew. Sparked by her friend’s request, Kutash began importing more frequently, opening her own company, Phases Africa, in the process.

She brings in fewer trinkets and more furniture now. Her collection includes tables made of the yellow jarah wood used in railway planks, chandeliers made with kudu horn and ostrich eggs and chairs made with ostrich skin or springbok hide.

With the exception of zebra, every single hide or horn that she sells is a byproduct of the food that is eaten in South Africa. Kutash said strict government-controlled culling has been enforced and the government determines how many zebras at each game farm are protected due to animal famine and severe drought.

Kutash also sells accessories such as ceramic busts, wire baskets made with telephone wire and sculptures of tall men and women – jutting, exaggerated skinny carvings painted to look like colonial Africans. Many of her dealers work exclusively with her in the United States, though they still conduct business in Europe and other parts of the world.

“I have to give something back to Africa and what better way to do this than to represent the top South African artists in America,” she said, sounding more like a talent scout than an importer. “My products are all handmade. …I don’t deal with factories, I deal with artists.”

For three years, she wholesaled her products until opening a showroom in 2004 inside of The Collection, a Los Angeles store that houses different sellers’ furniture, décor and various other products.

Recently, Kutash moved her showroom into a space more suited to truly convey the look of African furnishings – her own home.

Seated in a plush, camel-patterned fabric chair in her living-room-turned-gallery, Kutash takes a sip of rooibos tea to wash down a bite of shortbread before discussing her future plans.

Her business is now established enough to be fully operational – and she does it all without the help of employees. Customers can check products on her Web site via a password-encrypted online catalogue or visit her Newport Beach condo for product information and purchasing.

Her daughter is grown up now and about to graduate from high school. As Kyleen contemplates studying at an East Coast school, Kutash contemplates packing up and heading off again.

“I can still conduct my business,” she said, of plans to move back to Africa. “I’m getting that moving-continent bug again.” 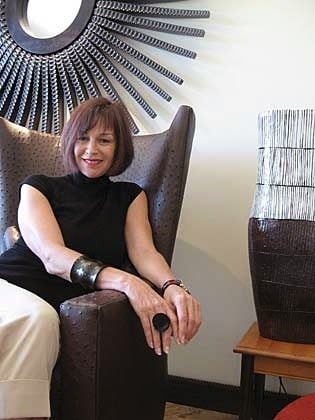 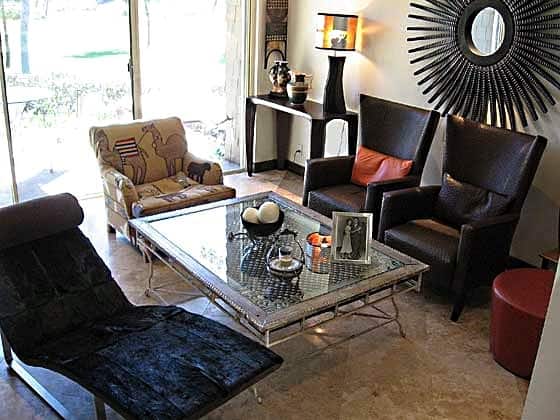 Page load link
We use cookies on our website to give you the most relevant experience by remembering your preferences and repeat visits. By clicking “Accept”, you consent to the use of ALL the cookies. Read more
Rather optout.
Cookie settingsACCEPT
Manage consent

This website uses cookies to improve your experience while you navigate through the website. Out of these, the cookies that are categorized as necessary are stored on your browser as they are essential for the working of basic functionalities of the website. We also use third-party cookies that help us analyze and understand how you use this website. These cookies will be stored in your browser only with your consent. You also have the option to opt-out of these cookies. But opting out of some of these cookies may affect your browsing experience.
Necessary Always Enabled
Necessary cookies are absolutely essential for the website to function properly. These cookies ensure basic functionalities and security features of the website, anonymously.
Functional
Functional cookies help to perform certain functionalities like sharing the content of the website on social media platforms, collect feedbacks, and other third-party features.
Performance
Performance cookies are used to understand and analyze the key performance indexes of the website which helps in delivering a better user experience for the visitors.
Analytics
Analytical cookies are used to understand how visitors interact with the website. These cookies help provide information on metrics the number of visitors, bounce rate, traffic source, etc.
Advertisement
Advertisement cookies are used to provide visitors with relevant ads and marketing campaigns. These cookies track visitors across websites and collect information to provide customized ads.
Others
Other uncategorized cookies are those that are being analyzed and have not been classified into a category as yet.
SAVE & ACCEPT
Go to Top</spa